When Melinda and Richard Gaulden bought Meadowbrook Funeral Home and Cremation Services on April 1, 2014, Melinda thought it might be exciting to design and build a new funeral home one day. And while she never completely put away the thought, she didn’t exactly think it was in the cards either. Then the winter storm of 2021 hit; and caused significant damage to Meadowbrook’s building, specifically the chapel. Now, eight years and six weeks after buying Meadowbrook, Melinda’s exciting thought will become a reality. The couple is about to build a brand new funeral home.

“We did have some significant damage to our chapel and to part of the funeral home. It made it necessary for us to either remodel this building or to rebuild it. We chose to rebuild simply because to remodel would have been a major undertaking with relocation necessary, so it’s the best option for us,” said Melinda.

They aren’t going to rebuild far away either. They are building the new structure in Meadowbrook’s current parking lot.

“We are going to build a new funeral home on the big parking lot here on our property. Hopefully, we’ll get that started within the next 30-60 days. We’ve got some soil samples that have to be done and getting the legal stuff in place to break ground, but it’s going to happen, and hopefully, it’ll happen soon, and we’ll be finished soon,” she said.

The current building will be demolished, and the property will likely be an empty lot for a short time. Gaulden said they haven’t decided on anything yet, but already have some good options regarding the lot’s future.

“It’s probably going to be a lot for just a little bit until we can decide exactly what we want to do with it, but this building will be razed.”

The contractors have assured the couple their crews will regularly clean up construction debris.

The pair consider themselves blessed to live in Marshall. They continue investing in Marshall largely because the people of Marshall have invested in them.

“We’re just thankful to be in Marshall, Texas. This community has loved us and supported us through some good and some difficult times, and we’re just so thankful to be here.” 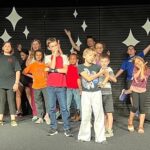 TxDOT’s Atlanta District has released its road construction schedule for the week of Aug 14-20, 2022